At GO GOOD GURU we’re all about making good health simple.  We do this using innovative techniques, technology and GOOD GEAR.

Now’s your chance to get the same gear we use to help our client GO GOOD.

Did you know that different parts of your brain control different functions, and that with exercise, you can make each part of your brain stronger?In The Total Brain Workout you’ll find 450 fun, challenging and absorbing puzzles designed to specifically target the core parts of your brain that control language, logic, memory, reasoning and visual perception. Each set of puzzles ranges from easy to challenging, and is presented with information on the area of your brain being targeted and the functions it controls, so you can customize your own workout to the specific areas you want to improve.

MARCEL DANESI is a professor of anthropology at the University of Toronto. He has published extensively on puzzles, and is the author of The Puzzle Instinct, Increase Your Puzzle IQ and Sudoku: 215 Puzzles from Beginner to Expert.

Crosswords, Sudoku, anagrams, brainteasers, trivia challenges—the list goes on! These terms are known to virtually everyone. But what you may not know is that such apparently “trivial amusements” also foster brain growth by stimulating logical and creative thinking regions of the brain. Research has, in fact, come forward recently to suggest (although not prove beyond a shadow of a doubt) that puzzles sharpen the mind, improve memory and keep the brain fit throughout life, especially in later life.As a boomer myself reaching the so-called twilight years, and a puzzle addict since my childhood, I welcome this news. If puzzles are to the brain what physical exercise is to the body, then let’s do puzzles—not just for fun, but, more importantly, for brain fitness.As a professor of anthropology at the University of Toronto, I became fascinated by the ancientness of puzzles and their constant use in cultures throughout the world as tests of intelligence and creative imagination. As a result, I conducted research on puzzles and wrote a number of scholarly books on the topic, finding out in the process how truly ingenious and productive the “puzzle instinct” is in human life. I now teach a course on puzzles at the university, studying every aspect of this instinct and, incidentally, having a lot of fun as I do so. I have also had the opportunity to work with neuroscientists and psychologists over several decades to design puzzle-based teaching and learning methods to help people learn better in various disciplines.This book is a product of my background experiences with both puzzles and pedagogy. I have constructed the 450 puzzles in it to “stimulate” specific areas of the brain and thus to help you exercise your brain in a methodical fashion. I really believe that this will help keep your brain fit. It is “chicken soup” for your brain.Each chapter contains puzzle genres that target specific brain areas. For example, visual thinking puzzles (Chapter 2) are designed to set off visual thinking processes that seemingly affect our capacity to learn and remember over time.There is, of course, no empirical way to demonstrate that a specific puzzle is capable of activating a certain part of the brain for all individuals—unless I were to put your brain through a PET scan as you solve it! Nevertheless, it is my opinion that nothing but beneficial consequences can come out of solving puzzles organized systematically according to brain functions.

Since the dawn of civilization, we human beings have been fascinated by puzzles of all kinds. Puzzles from Babylonia (1800–1600 bce), Egypt (1700–1650 bce) and the ancient civilizations of the Orient and the Americas have been discovered and shown to be remarkably similar in design. One of the oldest puzzles known to the Western world is the Riddle of the Sphinx. In Greek mythology, the Sphinx was a monster with the head and breasts of a woman, the body of a lion and the wings of a bird. Lying on a rock, she accosted all who were about to enter the city of Thebes by asking them a riddle:What is it that has four feet at dawn, two at midday, and three at twilight?Those who failed to answer the riddle correctly were killed on the spot. On the other hand, if anyone were able to come up with the correct answer, the Sphinx vowed to destroy itself. The hero Oedipus solved the riddle by answering, “A human being, who crawls on four limbs as a baby [at the dawn of life], walks upright on two as an adult [at the midday of life] and walks with the aid of a stick in old age [at the twilight of life],” and the Sphinx killed itself. For ridding them of this terrible monster, the Thebans made Oedipus their king.Throughout history, puzzles have captivated the fancy of many famous personages: Charlemagne, the founder of the Holy Roman Empire; Edgar Allan Poe, the great American writer; Lewis Carroll, who is best known for his two great children’s books, Alice’s Adventures in Wonderland and Through the Looking Glass; and Benjamin Franklin, the American statesman, entrepreneur and publisher, among many others. This fascination with puzzles continues today, as witnessed by the widespread popularity of puzzle magazines, brain-challenging sections in newspapers, puzzle books for children and adults alike, TV quiz shows, game tournaments and so on. Millions of people the world over simply seem to enjoy solving puzzles for their own sake. As the great British puzzlist Henry E. Dudeney (1857–1930) aptly put it, “A good puzzle, like virtue, is its own reward.”

PUZZLES AND THE BRAIN

The brain is a marvelous organ, but, like all organs, it needs to stay in shape, so to speak. In recent years many scientists have documented studies showing that doing puzzles enhances brain activity. I have undertaken “anecdotal experiments” by suggesting puzzle solving as a way to enhance or improve mental functions. One example hits very close to home; I suggested to a relative suffering from a debilitating brain-degenerative disease that he do crosswords. Before passing away, he became fascinated with doing them (for the first time in his life, by the way), and I was told by his wife that puzzle solving not only seemed to slow down the brain degeneration from which he was suffering but also enriched his life, giving him something interesting to do. Although such incidences in no way constitute “scientific” evidence about the power of puzzles to enhance brain functions, they fit in with the pattern of results that more technical research studies are documenting.The puzzles in this book are organized to give you a steady and graduated workout that is consistent with what the scientific research on brain functioning says. Like a physical workout, each chapter allows you to start off nice and easy, getting you to work up to the more complex levels gradually. These nine “sessions of brainteasing exercises,” as they can be called, will boost reasoning skills, memory and mental processing speed. This is backed up by numerous studies, including one conducted by Michael Marsiske at the University of Florida at Gainesville and Sherry Willis at Pennsylvania State University that was published in the Journal of the American Medical Association in 2006. The study showed that doing puzzle-type exercises, graduated in a consistent fashion as in this book, staved off mental decline, bolstered the brain and sharpened logical skills in adults over fifty in the same way that physical exercise protects and strengthens the aging body. The study also suggested that benefits accrued to the pre-fifty population as well.To reap the benefits, the study suggested, people need to progress from easy puzzle exercises to harder ones, which is just what we have done in this book. The book has, in other words, a “hidden structure” that allows you, chapter by chapter, to build brain power in ways that are consistent with the above-mentioned study and many others like it. So, let this book do its work on you by starting from the very first easy word-search puzzles to very complex logic and math brainteasers.If you want more brain-based puzzles and games after you have worked through this book—consider it a basic training manual in puzzle solving—you can get more by visiting these two Web sites: www.sharpbrains.com and www.happy-neuron.com.

HOW TO USE THIS BOOK

In all, there are 450 puzzles for you to solve in this book. They are organized into nine chapters, each containing fifty puzzles that have a specific brain-based objective built into them. The fifty puzzles in Chapter 1 are designed to help activate the language areas of the brain, for example, whereas those in Chapter 2 are designed to stimulate visual thinking areas. Chapters 3, 4, 5 and 6 involve logical thinking of various kinds. Chapter 6 contains one of the most popular of all contemporary puzzle genres—Sudoku. Chapter 7 presents your mathematical brain with classic conundrums to solve, while Chapters 8 and 9 involve linguistic and cultural knowledge. The book ends with an answer key, so you can check your responses to all of the puzzles.

Each chapter starts off with a brief summary of what is known about a certain function or faculty (such as language or perception) and what features of the puzzles fit with the related research. This is followed by five puzzle sections, usually organized in order of difficulty (unless puzzles of a certain genre cannot be organized in this way). The reason for this is obvious: as you become familiar with the structure of a genre through easy puzzles, you can then use this knowledge to really put your brain to work!

Facility comes with practice, and 450 puzzles organized according to brain functions will certainly give you this. At the same time, they will, I hope, also provide mental recreation. Have fun!

Did you know that different parts of your brain control different functions, and that with exercise, you can make each part of your brain stronger?In The Total Brain Workout you’ll find 450 fun, challenging and absorbing puzzles designed to specifically target the core parts of your brain that control language, logic, memory, reasoning and visual perception. Each set of puzzles ranges from easy to challenging, and is presented with information on the area of your brain being targeted and the functions it controls, so you can customize your own workout to the specific areas you want to improve.

There are no reviews yet.

Be the first to review “The Total Brain Workout: 450 Puzzles to Sharpen Your Mind, Improve Your Memory & Keep Your Brain Fit Paperback” Cancel reply 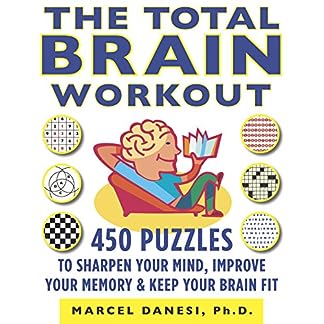